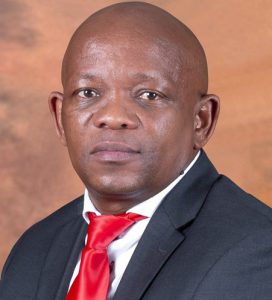 Mr Nqatha has earned his spurs from a diverse experience gained through employment in the community development sector, government and political activism that saw him elected to a number of leadership positions in the ANC, SACEarly in his working life he plied his trade at Dora Tamana Cooperative Center as their provincial manager, Researcher for then Land Affairs now known as the Department of Rural Development and Land Reform, Development Facilitator and Editor for Stutterheim Development Foundation.

Prior to the start of his career in government, he worked as an underground mineworker and later as an assistant at Amatola Star Bakery.

The new DRDAR MEC, who honed his attributes working for the Restitution section of the Department of Rural Development and Land Reform, completed a post graduate diploma in Land and Agrarian studies with the University of the Western Cape’s School of Governance empowering him to understand the particular and general aspects of the mandate of the DRDAR.

With Post Graduate diploma in Public Management under his belt, he is currently studying towards a Masters Degree in Public Administration with the University of Fort Hare.

He was deployed by the ANC to the Eastern Cape Provincial Legislature as the Chairperson of the Portfolio Committee Transport, Cooperative Governances and Traditional Affairs, Finance and Provincial Expenditure, member of SCOPA, Health, and Economic Development.

He is currently serving in the ANC Provincial Executive Committee and is also its Provincial Working Committee member following his election in to the PEC during the ANC 8th Provincial Conference in 2017.

The Eastern Cape Premier, Mr Phumulo Masualle appointed him to head the Rural Development and Agrarian Reform Department as its MEC in May 2018. After the May 2019 General Elections Premier Lubabalo Mabuyane appointed him as MEC responsible for the COGTA.

Mr Nqatha has an all-rounded experience, in-depth understanding of the theory & practice of networking, public communication, organizational development, policy research and policy reform having been exposed and trained as a land reform practitioner and activist in the NGOs sector and government since 1994.

From his academic background, professional and activist experience, the recently re-elected Eastern Cape SACP Provincial Secretary has developed into a multi-skilled, versatile and strong personality with interpersonal and organizational skills founded on integrity, well-developed listening.

His training and initial practice as a land reform practitioner position him well to collating and analysing facts and applying advanced research and problem-solving skills as a means of solving complex matters.

He has developed writing skills that include report writing, media writing, proposal writing, research report -writing, and the documentation of policy reform and advisory documents. He is married to Lungelwa and they have two sons, Sisonke and Ngcali.